The image above shows this technique in action in the SwiftMessages demo app. The transitions you see where done using a custom segue that I introduced in SwiftMessages 5 to utilize SwiftMessages layouts, animations, and more for modal view controller presentation and dismissal.

For this tutorial, we’re going to reproduce the bottom card-style transition. To keep it simple, some of the non-essential functionality, like background dimming and dismissal gestures, will be left to you as an exercise.

The full source of the final project can be found on our CustomSegueDemo GitHub repo. Let’s get started.

The segue’s action happens inperform(), which we override and do a modal presentation.

At this stage, BottomCardSegue is already a fully-functional custom segue. It just doesn’t do anything interesting yet.

Step 2: Set up the storyboard. 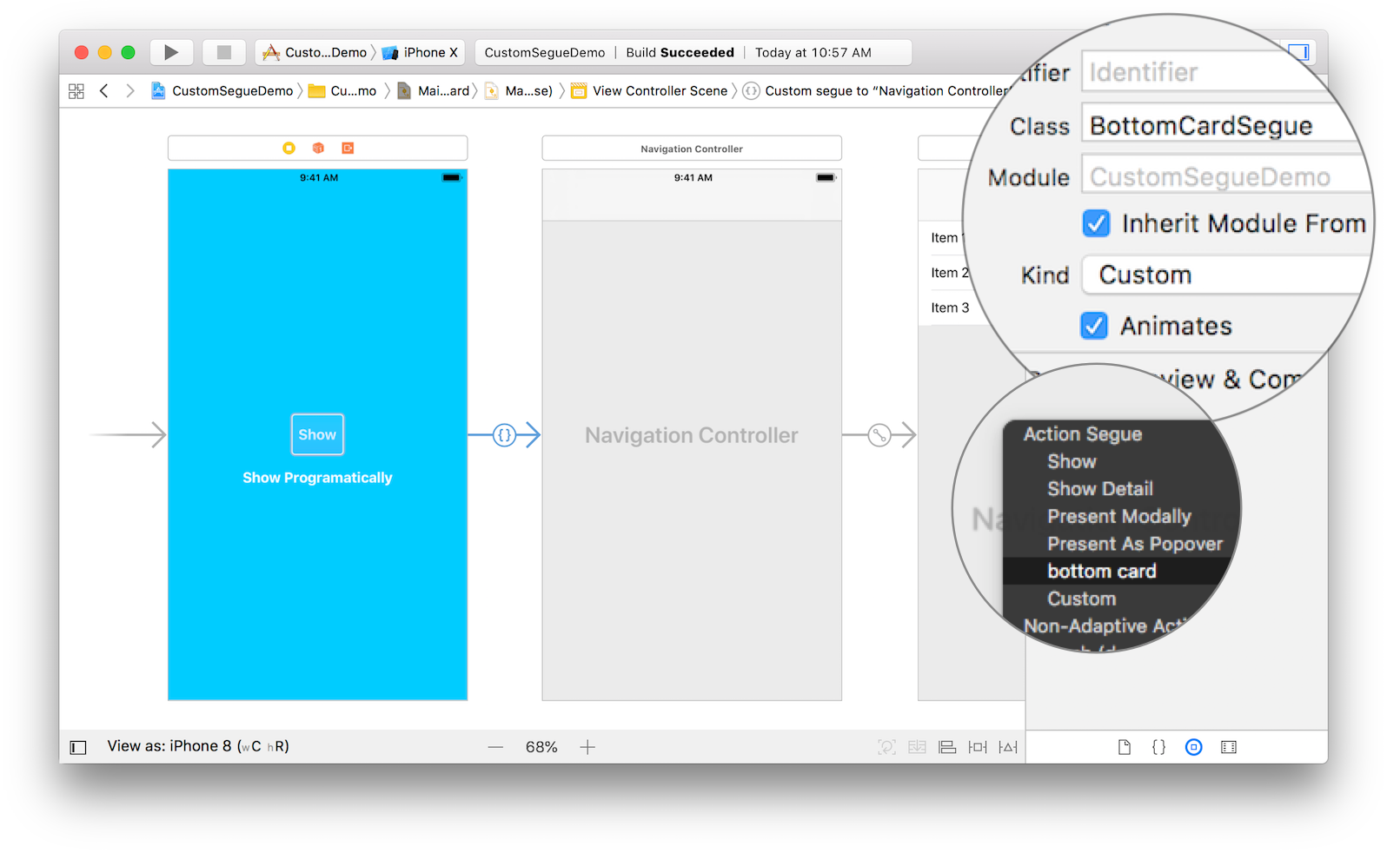 Taking a look at main.storyboard, the initial view controller consists of a “Show” and “Show Programmatically” buttons. The destination view controller is a simple navigation stack (copied directly from the SwiftMessages demo app). We define our storyboard segue (highlighted blue) using the standard procedure:

Next, we add a “Done” button to the root view controller. I would normally recommend having the “Done” button trigger an unwind segue. However, in order to point out that a custom segue experiences the same lifecycle as a built-in segue, we’ll add the button and configure its action in prepare(for:sender:).

The dismissal action is done in the hide() function by calling dismiss(animated:completion:).

You can now run the app to verify that “Show” and “Done” are working. What you’ll see is the default full-screen modal transition — the one that slides up and down from the bottom.

Suppose that we added an option to BottomCardSegue to specify whether or not to dim the background. In an ideal world, Interface Builder would support @IBInspectable on UIStoryboardSegue, allowing us to set the dim option directly on the segue’s Attribute Inspector panel. Alas, this is not the world we live in, so I’ll suggest a couple of for configuring segues.

While you’re considering which path to take, ask Apple to support @IBInspectable on UIStoryboardSegue!

First, set the destination view controller’s transitioning delegate to self to gain control over the transition.

UIKit doesn’t automatically retain instances of UIStoryboardSegue. Therefore, in order to stay around long enough to perform the dismissal transition, we need to create a strong reference to self. We’ll set it to nil after dismissal to avoid leaking memory.

Finally, we set the modal presentation style to .overCurrentContext to allow the presenting view controller to remain visible under the presented content.

The segue’s final task is to vend the dismissal component. So we are free to release the strong self reference just before returning Dismisser().

We won’t step through the above layout and animation code in detail because transition mechanics are not the focus of this tutorial. Many existing resources do a great job covering UIViewControllerAnimatedTransitioning (try Apple’s documentation, AppCoda, or objc.io).

No height is specified when preferredContentSize.height == 0 (the default). Instead, Auto Layout is left to work out toView‘s height based on its constraints.

A word of caution about UINavigationController. In our testing, the intrinsic height of a navigation controller does not reflect the Auto Layout constraints of its content. It is therefore necessary to specify a value for preferredContentSize.height. Without it, our navigation stack would have zero height. So let’s specify 200pt in the navigation controller’s Attribute Inspector panel in main.storyboard.

With that out of the way, we’re done! We now have a reusable UIStoryboardSegue subclass that utilizes custom view controller transitioning APIs to present a modal view controller using a card-style layout. Try it out.

We’ll conclude by showing how apps that don’t use storyboards can use BottomCardSegue. For simplicity, we’re going to use the view controllers in main.storyboard. The important point is that the transition will be performed programmatically without an associated segue in the storyboard itself.

To set this up, we introduce an @IBAction in the main view controller and connect it to the “Show Programmatically” button.

Use this to initialize BottomCardSegue.

Call prepare(for:sender:) to configure the “Done” button. I don’t advocate calling this in general, but UIKit doesn’t seem to mind.

Custom UIViewController transitions can be a great way make your app unique and enjoyable. We hope this tutorial has inspired you to give it a try. Thanks for reading and happy coding.