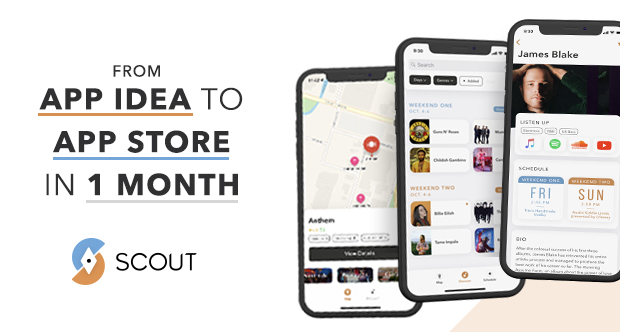 Many of us have had a killer app idea, but seemingly, most of us could not transition that idea into anything more than a dusty set of sketches in the attic. The reality is that many of our ideas, no matter how awesome, never get off the ground.

Transitioning from idea inception to a tangible app can be incredibly difficult. To be successful, you must understand and be ready for the many challenges that come with planning, development, marketing, release, and ongoing development within a tight time constraint.

Recently, I had the opportunity to take that killer app idea, and make it into a killer app, all in less than a month. Scout was designed to be the defacto festival and city guide app for the Austin area during Austin City Limits. I’m proud of the work that we accomplished to get it off the ground in such a short time, and I’d like to run you through the processes we followed in order to do so. I hope that by outlining our experiences and lessons learned, that I’ll be able to help others with an attic full of sketches.

The reality is that many of our ideas, no matter how awesome, never get off the ground.

ACL (Austin City Limits) is a large music festival held in Austin, Texas every fall, bringing some of the most well known as well as up and coming music talent to the big stage. I had just moved to Austin and wanted to attend so I ordered tickets and installed the official Austin City Limits iOS app.

Immediately upon launching the app, I noticed that the design, as well as implementation, wasn’t quite where it should be. I knew I could do better.

I took a moment to think about the core functionality that I felt an app for a music festival needed, and in particular, the features that I felt were missing or were sub-par from the official app.

With these core ideas written down, it was time to sketch out my initial designs.

In addition to my design sketches, I made sure to write down EVERY idea/thought that I had that related to the app. These initial ideas were super valuable later on for brainstorming and also for future development.

The first weekend of this year’s ACL Music Festival began on October 4th. My initial idea for the app was on September 7th, meaning I had less than a month to go from idea to a launched product.

Fortunately, my job is a kick-ass place to work, and with just a couple of meetings and planning sessions, I was able to get buy-in from the supportive crew at SwiftKick to collaborate on the app during the product discovery/design phase and sprint towards an aggressive target launch.

In order to complete such a large task (even with help), everything had to be planned out. We decided to experiment with Kanban (instead of a more traditional Scrum board), since this kind of project needed a lean and quick style of work due to time constraints.

Starting with what my end goal was, I started cutting each chunk of the app into smaller bite-sized pieces, making sure they were as modular/independent as possible. This also makes it much easier to delegate tasks for others to work on, since each bite-sized piece requires less domain knowledge, ramp up time, etc.

In order to reach our goal in under a month, we knew that we needed to start off strong with a Scout app style guide covering colors, typography, style effects, spacing, and dark mode variants. In order to move fast and ease development, we made a conscious decision to reuse as many components as possible and always reuse before creating.

As our style guide was shaping up, it was time to begin making prototypes for early user feedback and testing from friends or coworkers. It was important to us to get a release out there as early as possible, so we prioritized the tasks that led to our MVP.

Working closely with our designer deemed to be incredibly valuable, since iterating over features quickly tends to draw out the trickier and more nuanced discussions surrounding time/effort vs. quality. An example of this was the numerous discussions around the “Schedule” feature within Scout. Deciding on a balance between reusing existing components, and making a new, visually engaging interface, was a multi-day challenge. In our scenario, base functionality proved to be more important than having a new exciting design for one feature.

After completing the MVP in under three weeks, we released version 1.0 to the App Store on September 27th and began immediately reaching out to friends and family for feedback.

This initial release would be the first of five (1.0, 1.2, 1.3, 1.3.1, 1.4) updates within the following week leading up the first day of ACL, October 4th. Releasing as early as possible helped us when marketing Scout as well as being a contributing factor to having such a polished final build in time for the first weekend of the festival. These rapid releases were a perfect opportunity to implement various bug fixes and features that needed to be done, and they were released when ready.

Releasing when ready (typically every 1–2 days) as opposed to lumping into one larger update near the end allowed us to digest more feedback in a quicker fashion, as well as catch bugs that we may have otherwise missed out on.

Due to our time-constrained development, we knew that marketing the app would be an incredible challenge and was pivotal in making our efforts worth it. We took to brainstorming any and all possible strategies.

With our list of ideas at hand, we knew that in order to properly market Scout, we had to go through a branding exercise for Scout. We wanted to pull colors from the city and drive the feel of exploration, movement, and location. After several rounds of sketching, color picking, and vectorization, we landed on our spinning compass concept.

For marketing, we went with any and all ideas that we had the time and manpower for. Strategies that seemed effective for us included App Store Search Ads, a website landing page, Reddit posts, twitter, we even gave cash to people to pass out flyers around downtown!

To try and draw as much information from our marketing attempts as possible, we compiled a list of certain key stats that we thought proved areas of success as well as areas that we could have improved:

Following both weekends of Austin City Limits, while our memory was still fresh, we sat down to have a group retrospective to gather our thoughts on what went well, and what we could have done better on.

Overall, this was a great experience for creating a great product as well as learning new development strategies in a unique and time-constrained environment.

For anyone else that is interested in a similar style project or just development in general, I highly advise that you take in our lessons learned and roadmap strategies, as it was highly successful for us!

If you would like to check out Scout – Discover ACL, the App that we at SwiftKick Mobile created in just one month, check it out on the iOS App Store!